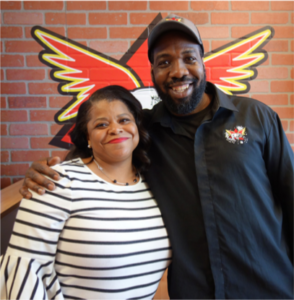 When Taj Pearsall opened his chicken wing restaurant Buffalo Boss at the Sherman Phoenix hub in late March 2019, he hoped to serve 50 customers a day. Less than two months in, he welcomes more than three times that number on a good day, and has high hopes for continued growth.

“Buffalo Boss is a family business, and I was fortunate to be able to bring this proven restaurant concept to Milwaukee,” Pearsall shared. “I knew what worked and what didn’t. And I had existing recipes, menus, marketing and more at my fingertips. All I needed was the financing.”

Pearsall recalls that he initially wasted time by bouncing around a few banks. Once he was referred to LRC CEO and President José Mantilla, things moved quickly.

“I left a message with José, and he called me back within 15 minutes,” Pearsall said. “I met with him and was really impressed that we spent most of the time just getting to know one another.” He added, “Then he introduced me to Terese (Caro), and she made things happen.”

While many LRC loan clients require more technical assistance, Pearsall came to the table with a solid business plan. “Terese helped me tighten up my plan and showed me that I was actually being too modest in my projections,” he said. “With her help, I was ready to go before the loan committee and open for business four months later.”

“It was so exciting to see the crowd at the grand opening and to know that diners are returning for more,” Caro said. “Taj is smart and passionate about his restaurant, and he has the drive to continue the Buffalo Boss success story here in Milwaukee.”

Caro explained, “At LRC, we work to change Milwaukee’s developing neighborhoods for the better. By investing in Buffalo Boss, we know that we’re not just helping Taj realize his business dream, we’re helping to create new jobs for area residents and foster even greater success for the Sherman Phoenix development and the neighborhood as a whole.”

Buffalo Boss is located at 3536 W. Fond du Lac Ave. Wings and tenders are made from 100% organic chicken with no antibiotics or added growth hormones. Twelve addictive sauces and delicious sides round out the menu. Learn more at buffaloboss.com.

Legacy Redevelopment Corporation © 2022 All Rights Reserved
Back To Top